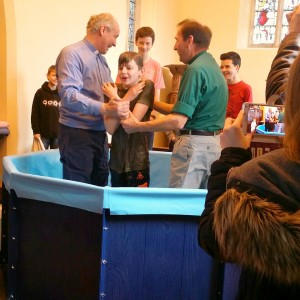 It’s a phone call no one wants to make and one we very rarely receive. Tudor Roberts at All Saints Lydiard picked up the phone the day before his baptism service to tell us his pool was leaking.

Ruth says “It’s the call we dread. We do everything in our power to prevent this happening and consequently it is a very rare event. But when it does happen my heart sinks into the bottom draw!  Because all we can do on a Saturday is pray for a miracle. It is a funny thing but as I prayed (and I prayed!) I had the really strong sense that God was doing something really special here and I should leave it in his hands. On Monday morning I was so humbled by what God had done.”

Tudor kindly shared his story with us:

“We booked a pool from you two years ago and did a baptism in our churchyard. That was in a United Service when we were part of a local ecumenical project and the Baptist minister did it. I helped put the pool up then and I remember thinking ‘I’d like to do that in my church’.

“Well, two years later we have Joshua Harris who’s 13 – his mother Becky Harris is one of our worship leaders and chose to have a thanksgiving service for her children and wait till they were older rather than baptise them as babies. There was a Confirmation coming up at the end of March nearby at Rodbourne Cheney, so I said, look it would be great if we could do a confirmation preparation course in advance of the confirmation service on 25th March. Having been to Africa and taught the Rooted in Jesus course in Kenya, I used that with adults and with the youth group.

“Out of that course, two adults who’d previously done the Alpha course wanted to be confirmed. Joshua really wanted to be baptised in his own church not elsewhere. So we got the pool in for him, and I was asked “Are you sure it’s going to be alright?” And I may have said “I’m a Vicar, you can trust me” or something like that!

“We also offered a rededication of baptismal vows for people who had been baptised as a baby. Joshua Scellier, who I’d baptised as a baby, said “I‘d like to do that” – he’s in Year two at school. In the meantime, we had lots of young people doing our 12 wk course in the weeks before the service and most of them turned up at the baptism.

“By Saturday 21st March, the baptistry pool was up and ready. On that morning we had our puppet practice and a couple of the kids said, ‘Tudor… it’s leaking!’ I rang up Baptistry UK and they explained that we needed to empty and refill the pool. That afternoon with help from Becky Harris, we emptied it. I wasn‘t best pleased as I saw there was water on the floor in the church! Becky tried to look on the bright side and said maybe it was a fulfilment of the prophecy in Ezekiel that water will come down from the altar.

“We then refilled it but not so high. Becky said I’m going to pray and get my parents to pray and we hoped it would make a difference. And it did because the next day, when we went in, it was much better.

“Everything before this service that could go wrong went wrong. The data stick with the songs on would not work; we managed to get it working eventually. Someone forgot the bread for Holy Communion and I forgot the Baptism certificate. Then during the service an elderly lady collapsed and a paramedic had to be called – luckily she’s fine as it was a hypo glycaemic attack. It was very Vicar of Dibley.

“But what was most amazing was the atmosphere of joy in the church. So many teenagers there were gathering round the pool. We called the two boys being baptised big Josh and little Josh to tell them apart!”

One of Tudor’s parishioners said to him “I thought it was very beautifully done in terms of making both big and little Josh feel that it was a special service for them. It was lovely to have the young people up watching it at the front and it felt like God’s family celebrating something very special this morning.”

Tudor continues, “I think it was a real turning point moment for the church. So by the time I spoke to Baptistry UK on the Monday morning, all my negativity had disappeared and I was so thankful. Our youth work is now growing and we’re hoping to employ a youth worker from September and we’ve just started a new children’s service at 9.15am once a month at which we had 40 people and another service at 10.30am with lots of time for praise and testimony – it just took off and people are asking what’s happening.

“The baptism wasn’t the only thing but it was one of the things that helped an ordinary church like us get new hope in the Gospel.

“Interestingly, a number of other Anglican churches in the Deanery are now looking at baptism by immersion. We may end up buying a pool for the Deanery. Becky said that it just showed how God answers prayer. The immersive baptism was one of those things in recent months that has produced new growth and new hope in our church; some of the other things we’ve done in the last year is we’ve got a new piano, our new toilet is opening soon and now we’re hoping to get a drum kit and a youth worker, we feel reinvigorated in our work.

“Now I understand why Baptist ministers get so happy! We’ll continue to do baptisms for babies of course, but we want to use immersive baptism too now. We’d be happy to use Baptistry UK again.

“The whole service felt different because of the number of young people around and the sheer atmosphere of joy in that part of the church. Our Church origins go all the way back to the 12th Century… but this was something new for us.”

With many thanks to Tudor for sharing his experience with us, it’s a wonderful story of how, even if something goes wrong, baptism can offer rebirth for the whole community, creating a joy and enthusiasm that’s truly invigorating.

This site uses Akismet to reduce spam. Learn how your comment data is processed.